The Second Struggle for Freedom, the uprising as its being called is truly remarkable. The way it has managed to get all our attention would bring shame to the best marketing gurus. I had followed the Anna Movement very closely last time. Was actively a part of it, protested with Anna at Jantar Mantar, spoke in his support, till I read draft of the so called ‘Jan Lokpal Bill’ (JLB). I had serious reservation in supporting the JLB and also the way it is being tried to be imposed. Yes imposed because it is detrimental to the future of our nation.

Most people supporting and agitating out on the streets demanding the enactment of the JLB are unaware what it is in black and white. The government has proposed a Lokpal Bill which is being said to be worthless. I agree to a lot of extent. But if the Government’s Bill is not worthy it doesnt make the JLB worthy, it too has some serious flaws. The JLB seeks to make an investigating agency which will have a supreme power to prosecute anyone on a complaint made by any person. The JLB seeks to question any decision taken by the Government. The JLB seeks to prosecute the Judiciary on any complaint. I think this is nothing but creation of a body supreme to rule the country. A body which if it wants can bring the country to a stop at its whims. What if this body goes corrupt? Its being said it cant go corrupt. This make me laugh thinking that the corruption at the end is a creation of we the people who are fighting against it today. Corruption is a wrong we have been committing just for own convenience. If we can elect corrupt people to the parliament then what will be the guarantee that the people elected as lokpals wont be corrupt?

The Judiciary which is being lauded lately for its role in bringing the Government and corruption in the dock, will unable to function with the JLB in its entirety in force. Think of a scenario that a Judge passes a judgment against some person and that person makes a complaint to the Lokpal that the decision of the Judge has been biased because of his being corrupt or because he has been influenced by the opposite party. The Lokpal starts investigating the complaint and even though the Judge has been honest and even if he is subsequently exonerated, he will be in the docks and go through a mental harassment. It will ultimately take away his boldness and affect his performance. The same would apply to the PM. I am not saying that a corrupt decision should not be checked, but then it should not take away the independence these authority have been entrusted with under the Constitution. It should not make it possible for them to be put on ransom.

Corruption is an issue we all wish had never been. The economic development the PM was talking of the other day in his statement would had been manifolds, we might have even probably been ahead of China had the corruption not been the inherent feature of your life. We all are sick of this and its even the wish of the corrupt that the corruption should be killed, after all even they face corruption sometime in their life. But the JLB is not going to kill corruption. It can not erradicate the corrupt, cause we all are an equal participant in corruption. We need to understand that until unless we change ourselves nothing can be corrected. If we don’t stop bribing, then even the Lokpal will have no effect. If we don’t elect with due application of our mind then we will always be ruled by the corrupt.

I do support a movement against corruption, I do applaud the people agitating against corruption, I do want corruption to be history. But I dont support a movement to bring a bill. We have to understand that the issue is corruption and not just getting a law. As I had written in my earlier post comparing the movement to the Jasmin revolution, the movement should not be focused to the JLB but should be focused towards the bigger issue of eradicating corruption. We need to rise above corruption and lead to a path to a society which does not put us in stress. We need to act as a literate society and apply our own mind, surprisingly most of those agitating have no knowledge about the JLB. We should not flow with emotions and be puppets to some people. The movement is not about one person, it is about the cause. I would really request all those supporting the JLB to understand the Bill and to foresee the implications. Its not that we dont have laws to check corruption. Our existing laws are also stringent enough to curb corruption. The Prevention of Corruption Act is one of the most stringent laws we have, it is even applied strictly, but then there are certain provisions which makes its applicability difficult. What we lack is the proper application of the existing laws, the proper functioning of the entire system. What we need is laws towards the accountability of the Government officials and the Judiciary.

So let’s support the campaign against corruption, not a campaign for JLB. Let the things be done under the constitutional framework. Lets understand that just a bill is not going to curb corruption but it is us who has to change to bring corruption to a halt. So next time when you are caught for a traffic violation then don’t try to escape from the shorter route, be bold enough to face the consequences of your mistake. 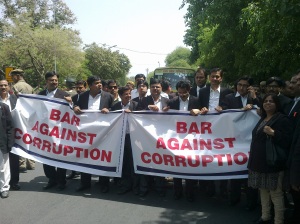 I had been thinking of going to Jantar Mantar since last few days and when I came to know that the Supreme Court Bar Association was organising a march to ground zero or the new teerath sthan as some news channels had been claiming, I could not think of a better chance to go there.

The march started with about 50+ lawyers at around 1:30 pm and we walked from the Supreme Court to Jantar Mantar. There were as many police officials as us to make sure we don’t go on a rampage out of excitement. The walk honestly was an experience with all the slogan screaming and traffic stopping but yet was not a good idea in the scorching heat. We reached the site after walking for about 40 mins and were welcomed by cameras and media people. The mood was upbeat and all we could hear was “Anna tum sangharsh karo, hum tumhare saath hain” (Anna keep protesting we are with you), the national flag was seen everywhere and patriotic music was being played in the background. Felt like the scene from all those movies I had grown up watching based on our freedom struggle. It gave an instant adrenaline rush and the feeling to kill all corrupt people in the country.

Anna Hazare was sitting on a stage with Kiran Bedi, Tom Alter and a few more people. Baba Ramdev was on the mic talking against the corruption and the corrupt. He then started singing a patriotic song he had written. The crowd was cheering and chanting Vande Mataram. I was not very happy about Ramdev joining the revolution as he is politically inclined. But then someone said that people like him are needed as they are capable of attracting more people into the whole jing bang.

After a while Ram Jethmalani, the president of the Supreme Court Bar Association, arrived at Jantar Mantar and after a massive ordeal made it to the stage where Ramdev welcomed him and he gave a small speech. I was walking back with him to his car when some media people caught him for a few questions. Whether he supported the Jan Lokpal Bill? He answered quickly, this whole agitation should be above the bill, one bill is not going to bring the change we all are looking for. A young man said Mr. Jethmalani that the youth are out here and revolting on which he candidly said that he wonders why does the youth need a ‘budha’ (old man) to revolt. This response made big sense and made me realise that we are not complete without our older generation.

The 2 hours I spent at Jantar Mantar took me through a nostalgic time we all have experienced through all the books and movies on the Independence struggle even if we haven’t lived it. From Vande Mataram to Inqalab Zindabad, the Tiranga to the self less support of all the people there. Though I did feel a lot of them were there just because of the media attention, dressed up in the most unwanted fashion for the occasion. The environment there did make me believe that Indians are not just bothered about their own life but they still care for India. The kind of support the whole revolt has garnered is amazing.

Although I still believe that this should not be a one point agitation and end with the demand of a law against corruption being fulfilled. The law is not going to help the cause as I said in my earlier post in some ways we all are corrupt. If we were not then this situation would had never seen the day. Next time let’s elect those who are not corrupt and let’s not be a victims of false promises. The upcoming state elections is the time to make the right decision and stand tall against corruption without any fear.

Be yourself for once!!